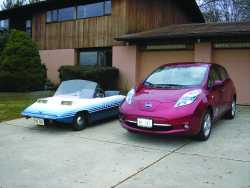 When I wrote my first story for Bay Weekly in the beginning of my senior year in high school, the Gingras name had already been mentioned in the paper’s pages.

I wasn’t only following in my grandpa’s footsteps; I was also driving his car. Not the car’s he’s famous for, the one that led him to these pages. That one has resided in the Baltimore Museum of Industry since 2012, when I was 11 years old. With license plates that read No Gas, that car was built in the 1970s, was powered by eight batteries between the driver and passenger seats, and topped out at 40mph.

No Gas had no roof or door, so Grandpa had to hop over the side. Still, he drove it to and from his work as a design engineer for technology and early computer development for Control Data Corporation in Northeast D.C. That was when he lived in Rockville. His and Grandma’s new home, in Anne Arundel County’s Chesapeake Overlook, was too far for No Gas.

I’m driving the electric car Grandpa Bill Gingras bought to replace the homemade one-of-a-kind electric car he built nearly half a century ago, inspired by the 1970’s gas crisis and his desire to improve how things work. I’m driving his all-electric 2012 Nissan Leaf, which I inherited when I started driving, a year after he passed away.

I’ve always been one to support a cleaner environment, and growing up where that was reinforced, I was naturally attracted to the idea of driving without fossil fuel. Still, I never would have imagined that my first car would have been all-electric.

Most electric car makes are still in their early stages of development and widespread use, making them hard to fit the lifestyle of a busy person who doesn’t live in a city where there are charging stations every few blocks. And the technology has changed in the eight years since my Leaf was made, making it harder still.

I’ve been driving the Leaf on a regular basis for a year and a half. As it is one of Nissan’s earlier models, it charges up to 100 miles, or so it says. While using the air conditioning in the summer and heat in the winter, it doesn’t go nearly as far as it did when it was brand new. But it still manages to fit my lifestyle.

Because I live in Calvert County, my daily activities aren’t always conducive to driving my Leaf. School, golf and dance take up most of my life. On the days I have all three, my driving mileage is 75, which is at the top end of my car’s capacity — without amenities. Also, my weekend activities, or the times I want to go visit my friends and family out of the county, aren’t always easy. I’ve learned how to carefully plan my route so I won’t be stranded with no charging station in sight.

Of Maryland’s nearly 2,000 charging units, most are in Baltimore County. There are some in Calvert County, and they are very efficient. Unfortunately, most of the time they are out of my way, so I primarily charge my car at home. At my house, I have a charging system attached to the garage with a 15-foot cord that reaches to the plug-inat the front of my car. This is considered a Level 2 charger because it takes roughly three to four hours to get a fully-charged battery. Although I don’t have to, I still charge my car every night just in case I have to go somewhere I don’t expect the next day.

Occasionally, I’m able to charge my car at school, on evenings or weekends. I’m able to pull my car up to the school and plug it into a regular outlet using my Level 1 portable charger. To get a full battery with this charger, it can take up to a full day, so it’s not ideal. But it works in emergency situations.

I have used public charging stations in the county before, my favorite being in North Beach. Using an app called ChargePoint, I can check the availability of the charging port and pay from my phone, costing me $0.25/kWh. It will also notify me when my car is done charging. At most, this has taken me about the same amount of time as a Level 2 charger.

How efficient is charging my car? I equate the amount of energy my car uses to get a full charge to what’s used on a load in the dryer. So there’s definitely an effect on the electric bill. Despite the close calls I’ve had with my car, I must remember it’s still cheaper than paying at the pump.

“I think driving electric in Calvert County is a hard thing to do,” said Cortney Costello, a teacher at Calvert High who is familiar with my daily activities. “Anyone doing it here is making a difficult, but responsible choice.”

Most of the people at school know I drive an electric car. As far as I know, it’s the only one. As it is bright red and says Zero Emissions on the side, it would be hard to miss. My friends like my car and the idea of not having to pay for gas. When we go out though, they normally drive because they know how my car can be.

Despite its issues on occasion, I love driving this car. Most of all, I love it because of its history. Owning it makes me feel like I’m keeping my grandpa’s legacy alive.

After it is time to retire this car, I don’t know if I’ll ever be able to go back to 100 percent gas.

Read more in No Gas in the Tank, April 19, 2012, by Margaret Tearman and Michelle Bazinet: http://bayweekly.com/articles/green-living/article/no-gas-tank

This story was originally published in the ‘Bay Weekly’ on January 9, 2020.