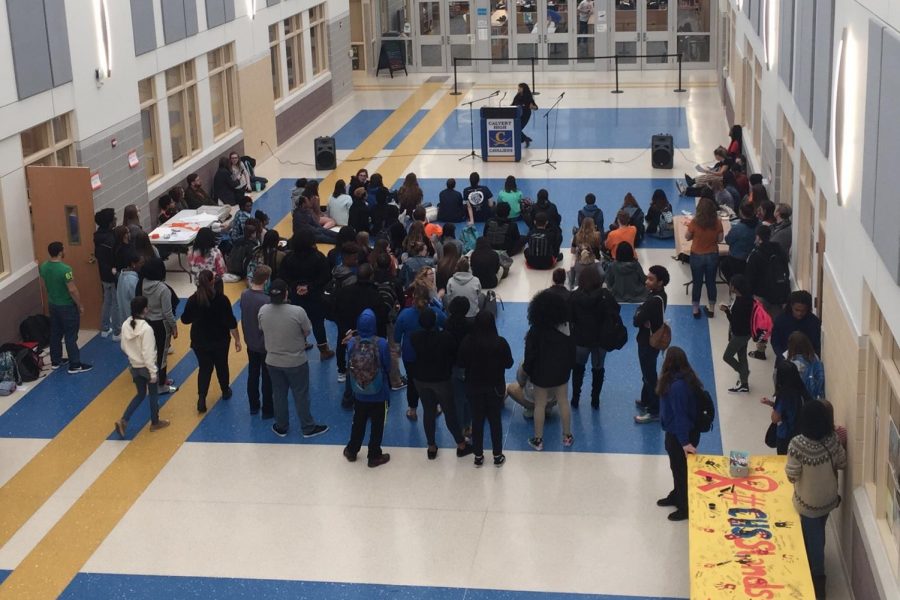 On March 14, 2018 many of Calvert High’s students participated in the nation-wide walkout in recognition of the Parkland tragedy, as well as the school sponsored lunchtime event “#CHSStands4Change” to raise awareness on school safety.

At 10:17 AM students returned to class, and the lunchtime event began. The atrium was filled with student-led activities to promote awareness of the school safety issues and encourage fellow classmates to use their voices to join in on the movement for change. Event supervisors, Mrs. Kristen Ratcliff and Ms. Kathryn Wolber, allowed students to have creative freedom in organization of the hour’s activities.

Regarding this decision, Ms. Wolber states, “Ms. Ratcliff and I wanted the event to be student-driven so the message was what they felt needed to be said. We didn’t want to make the event about how teachers, administrators, or the public in general view the issue of safety in schools. We provided feedback and guidance, but the students had creative control over what was or was not included.”

In addition, efforts were made to make activities bipartisan among the controversial political issues the Parkland tragedy raised. When asked how this was achieved, Mrs. Ratcliff states, “The event, #CHSStands4Change, was planned by students, for students, to give everyone a place to come together to participate in activities that were bipartisan in nature; to both remember and honor the lives of students lost to gun violence, as well as offer ways to change the way we treat one another.”

The day marked the beginning of a conversation and served as a platform for students to get involved.